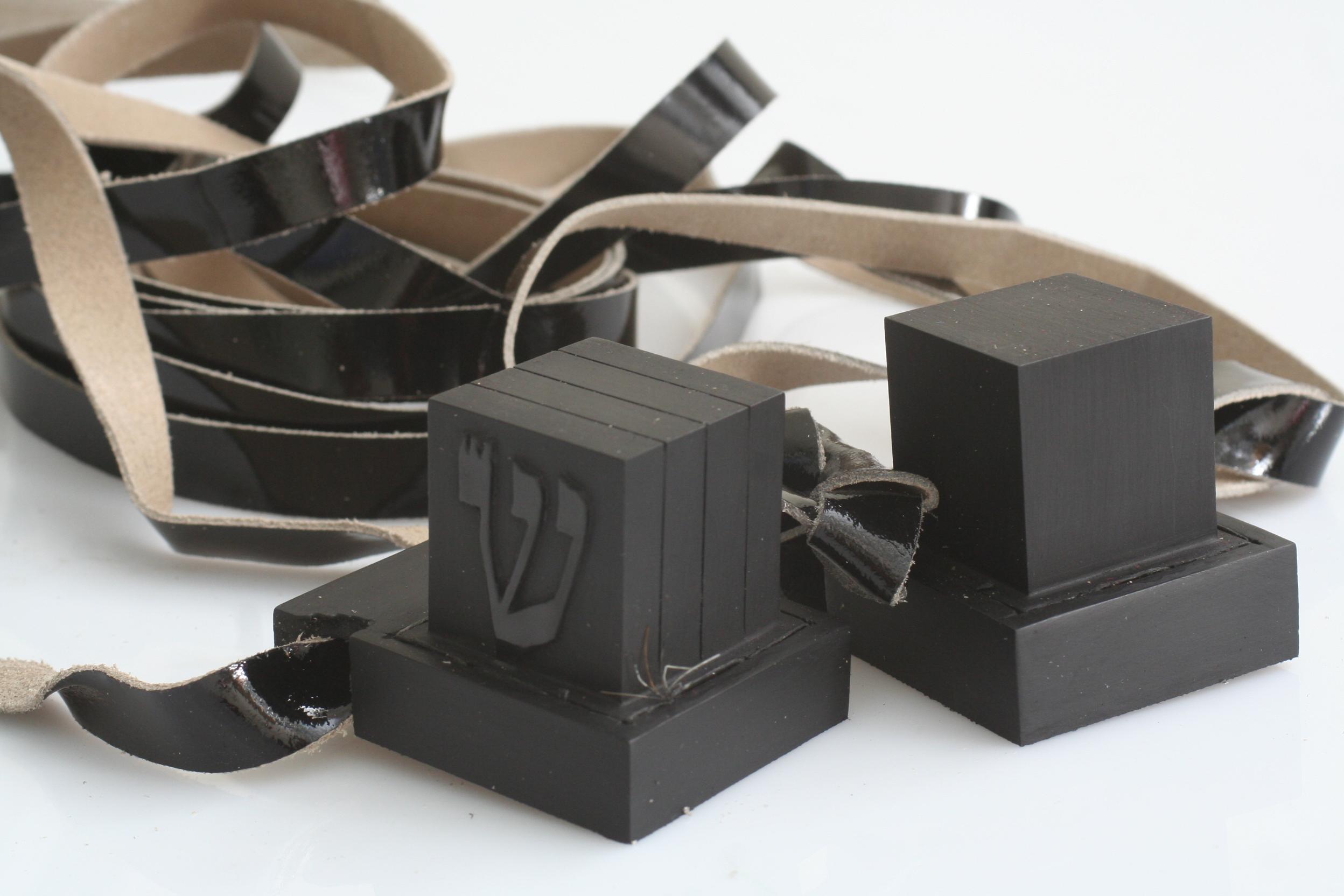 Tefillin – (known as phylacteries in English – amulet in ancient Greek) are worn by Jewish men from the age of Bar Mitzvah – 13 years old, bound with Retzuot – leather straps – onto the weaker arm (left arm for right handed, right arm for left handed) and on the crest of the forehead, during the morning prayers.

What are the boxes made from?

The boxes of the Tefillin (known as BATIM, “containers” for the written parchments) are made from specially treated leather and must be square/cube. They vary in quality, in the way they are made. Peshutim (Hebrew for “simple”) are basic Batim – boxes, Dakot are made from sheepskin and Gasot are made from cowskin – ideally from one whole hide (Or Echad – “one skin”).

Almost all the Tefillin Batim today are produced in Israel using advanced factory technology in the curing and shaping processes. This has helped produce higher standards in the manufacturing of the tefillin batim. It is worthwhile knowing that there are many batim manufacturers that claim to make batim – but they are only ‘finishing’ factories. The process is very smelly and messy in the production of hide which is turned into leather and shaped to make the intitial production.

What is inside the boxes?

The Tefillin contain parchments on which are written the four sections of the Torah in which they are mentioned: “And you shall bind them for a sign upon your hand and for a remembrance between your eyes” (Exodus 13:1), and with slight variations in Exodus 13:11, Deuteronomy 6:4 and 11:13).

These Biblical texts must be written by hand, in chronological order, on parchment from a potentially Kosher animal. Tefillin contain head four Biblical passages (above) written on four different pieces of parchment and placed in four separate compartments; in Tefillin for the arm all four passages are written consecutively on a single parchment and inserted into a single box. These parchments are known as Parashiot.

According to the Halacha (Jewish law), hundreds of laws govern every detail about the making of Tefillin, including the most minute details of the materials and the writing. Due to the meticulous requirements, it is very easy for something to go wrong during the production of Tefillin, sometimes in ways which cannot be seen at all afterwards.  If a mistake is found after the Tefillin are written, it simply cannot be scraped or repaired. This is one of the reasons it is imperative to purchase Tefillin only from a careful, honest, authorized, reputable scribe.

Jewish law does not require checking Tefillin which are in regular daily use (Tefillin are bechezkas Kashrus) unless some mishap befalls them, such as exposure to water or excessive sun. Nonetheless, it is customary that they be examined from time to time to ensure that they are kosher (some check yearly, some twice in seven years–like Mezuzot, some less frequently). Our recommendations depend on the quality and kind of Tefillin which you have. Tefillin which are not being used must be checked like Mezuzot, twice in seven years.